Progressive Web App technologies let you delight your users with the best modern browsers have to offer, without sacrificing compatibility for legacy environments. 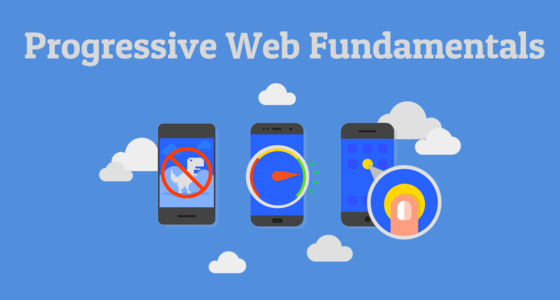 We'll look at the important characteristics of Progressive Web Apps, and introduce some important metrics like "time to first paint" and "time to interactive". By getting hands-on experience with advanced areas of Chrome developer tools and other utilities, we'll learn how to keep an eye on "progressive web fitness".

Service workers allow web applications to boot nearly instantly, regardless of whether the network connection is slow or completely absent! We'll begin with recipes for HTTP caching, and then get some serious practical experience with service workers. We'll combine FIVE great caching strategies, to achieve an optimum balance between data that's as fresh and instantly available as possible.

When we think of web applications as just another "thin client", it's clear that we need more durable storage primitives than cookies and localstorage. We'll get some hands-on experience with IndexedDB, a NoSQL database that's bigger, faster, more flexible and efficient than any of the other "classic" options.

In many ways, Progressive Web Apps provide features and a user experience that users expect from native apps. We'll dive deep into the concept of a Web App Manifest, and add more metadata to our project to allow it to feel like a native app when launched from a mobile device home screen. We'll also look at how we can use web push notifications with our service worker!

Single page apps have a reputation for providing rich experiences, but at the cost of having to download lots of code that tend to run slowly. It may seem that this is the inevitable consequence of complexity. However, with a few adjustments, we'll be able to keep both initial and return visits loading quickly and performing as well as they can in modern JavaScript runtimes.

It's time to put everything we've reviewed so far into practice, as we study two important PWA architectural patterns. First, we'll employ the "app shell" pattern, whereby the frame or "shell" of the app is cached locally (and loads instantly). Secondly, we'll employ the PRPL pattern (Push, Render, Pre-Cache, Lazy-Load) to ensure that even after a minimal portion of our app loads initially, the rest of the app begin to prepare itself for instant availability in the background.

We have an unapologetic bias for the pragmatic and will make sure you leave with skills you can actually use. We've carefully crafted examples that reflect real world problems developers encounter daily.

Toy problems are fun, but we want to make sure you leave with skills and not just another pointless tutorial app. Prepare to tackle some serious snags, in a non-trivial context!

We pride ourselves in making web technology as approachable as possible. By the end of this training, you'll be the one explaining these topics to your peers!